In Semester One, we held a preferendum for students to have a say on whether the Guild should support the upcoming UCU Industrial Action. After 1902 votes and with 2184 points, you have voted for: Yes, The Guild should adopt the proposal.

Standing in solidarity with the UCU during strike action taking place from Monday 14th February, and ongoing action short of a strike the Guild will:

In our UCU Strike Information hub we will provide a background to the UCU dispute, a statement from the Student Officers and FAQs so you can understand why UCU are taking industrial action, what you can do to support it and why student staff solidary is so important. 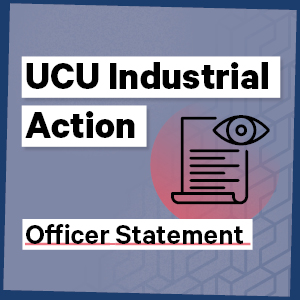 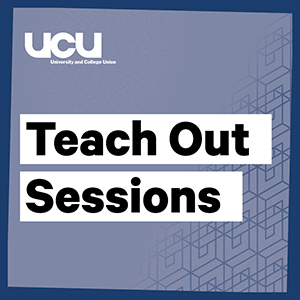 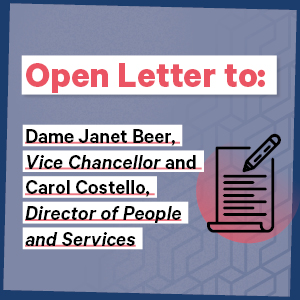 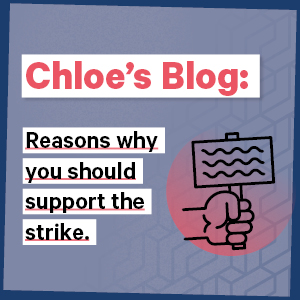 The University and College Union (UCU) have recently balloted its members on whether they want to carry out industrial action. At the University of Liverpool, UCU members voted in favour of undertaking action short of a strike, and strikes in relation to pensions, pay and working conditions. They have now announced that they will be taking strike action from 1st – 3rd December, and ongoing action short of a strike.

What can you do to support the strike 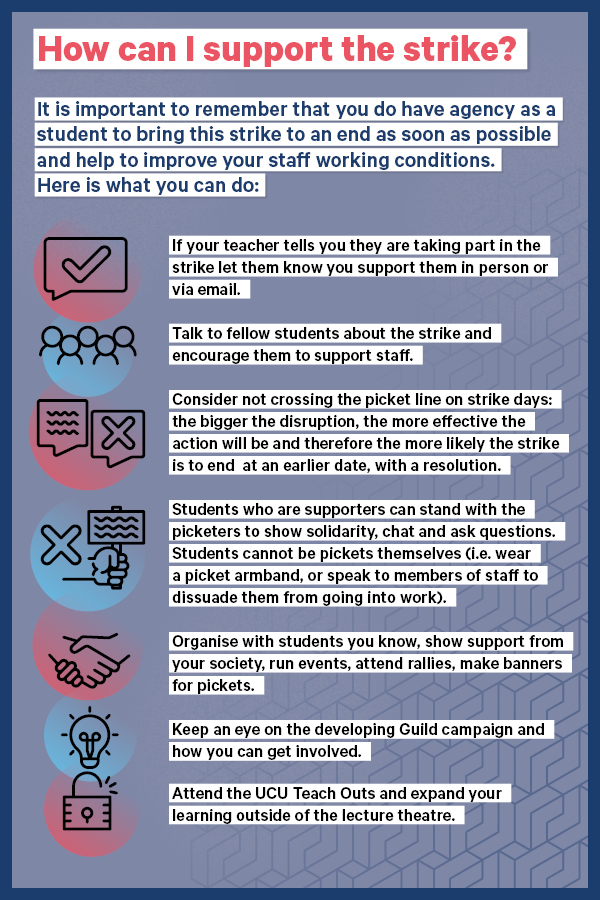 The strike is due to take place from Monday 14th February - 2nd March.

In the Four Fights dispute, there will be strikes from 21-22 February and 28 February-2 March.

There is a chance that all or some of the strike days won’t go ahead if the negotiators reach an agreement on pensions, pay and working conditions with UCU.  As well as the walkout, staff have a mandate to take action short of strike and will include strictly working to contract and refusing any additional duties. This is set to go on indefinitely for the period staff have a mandate (this is six months from the date the ballot closed- 4th November 2021), or until a resolution is agreed between parties.

The industrial action referred to has been called by The University and College Union (UCU). They are a trade union that represent over 110,000 academics, lecturers, trainers, instructors, researchers, managers, administrators, computer staff, librarians and postgraduates in universities, colleges, prisons, adult education and training organisations across the UK.

There have been unsuccessful negotiation on pensions, pay and working conditions to try to reach an agreement with universities nationally.

USS (Universities Superannuation Scheme) is the pension scheme used by universities. A pension works by employers and employees paying money into an employees’ pot while they work which employees can then access when they retire. They can either be run in two ways:

The USS has been running at a deficit for a few years which means it doesn’t have enough money to pay out to retirees. It made reforms in 2016 to run on a hybrid model of defined benefits up until employee salary threshold of £60k. Salaries above that become defined contribution schemes.

This resulted in strike action in 2017 which was inconclusive, and then a second wave of strikes in late 2019 and early 2020 (though the second wave expanded to include the ‘four fights’ outlined below). When the pandemic emerged the strikes/ dispute was called off. Another assessment in 2021 revealed that the USS were in even great deficit which needs to be filled with higher contributions or lower/reduced benefits – employees who are working will have to give more of their salary to the pension pot without an increase in pay out value at retirement or they will get a lower pay out when they retire.

The UCU say that under recent changes since 2011, a typical UCU member will pay around £40,000 more into their pension but receive almost £200,000 less in retirement because of the changes to USS. They say that this will leave them £240,000 worse off. UCU are calling for a stop to the changes outlined above, and for a new valuation of pension fund to be carried out.

There are four main issues in relating to pay and working conditions that members of the UCU are striking about. These are:

It’s when workers protest by not working in order to put pressure on their employer, to fulfil the demands made by the workers. Some academic staff won’t work on strike days, meaning they won’t teach, plan lessons or mark assessments. In addition, some professional services staff will also strike, meaning there may be an impact on the services they deliver.

Strikes are a kind of industrial action often considered a last resort. It involves members of a trade union choosing to withdraw their labour during a dispute, often when negotiations have stalled, or a compromise solution has not been found. The ‘right to strike’ is internationally regarded as a basic human right. When workers go on strike, they will form what is called a ‘picket’ outside their place of work. This is to encourage other workers to show solidarity with the strikers by refusing to cross into the workplace – for many, not crossing a ‘picket line’ is a point of principle.

A required vote of members of a trade union as to whether or not to resort to industrial action.

There are two types of strike action that the University of Liverpool UCU balloted on:

The UCU define it as:

The intention of ASOS is to legally slow down productivity. More information on ASOS from UCU can be found here:

Any lecturer taking part in the strike will not be working on strike days - meaning teaching and supervision will not take place. This means that many lectures, seminars and tutorials will be cancelled.

There will be a picket line in front of academic buildings on strike days. A picket line is a boundary established by workers on strike, usually at the entrance to their place of work, to draw attention to their cause and to encourage others to not cross the picket line and enter the workspace.

Pickets should be held peacefully and we expect that campus will be a safe environment for students. If you do feel unsafe at any point you can get in touch with campus support who can escort you on campus. 0151 794 2222.

We understand that the length of the strike could have a big impact on your teaching hours and you might be worried about assessments and achieving a good grade this semester.

We will provide more information following any discussions with the University on any changes to assessments or extenuating circumstances on offer to affected students. As always, our Advice Team will be here to support you.

There is advice from the Office for Students on what you can do if your studies have been affected by industrial action including information about the Consumer Rights Act: www.officeforstudents.org.uk/for-students/guidance-for-students-affected-by-industrial-action/

If you're a postgraduate student who teaches, we encourage you to join UCU for free. Supervisions are likely to be affected in the same way that lectures and seminars will be, so your sessions may not take place.

For those of you considering strike action the University has confirmed the following:

Graduate Teaching Assistants (GTA) cover a range of roles. If you have an hourly paid contract with the University, you will be treated as employees and so will have pay deducted in the appropriate manner.

If you are undertaking teaching or demonstrating duties as part of your studentship you are not an employee and are therefore not entitled to strike. However, the University recognises that you may not wish to cross a picket line in your role as GTA. As you are not employees of the University, no action will be taken against you. We would, however, encourage you to let your department know as soon as possible if you do not intend to undertake your duties during the industrial action so that departments can plan accordingly to minimise the impact on other students.

The University has confirmed that if a lecture is cancelled due to the strike action, this will not affect your visa. The University will continue to maintain sponsorship of all Tier 4 students whilst they are on their course.

However, if some of your lectures or tutorials are taking place during the strike, the University expect students to attend. If you choose not to cross the picket line and therefore do not attend lectures and/or tutorial on modules you are registered for, you will be recorded as absent in line with your School’s attendance policy on attendance.

For international students, the University’s existing policy on absences will still be in place and students will still be expected to attend. Visa status may be impacted if a student’s attendance falls below agreed levels.

Whilst we encourage students to consider not crossing the picket line, we understand that international students will need to attend lectures due to Tier 4 Visa requirements

It is important to remember that you do have agency as a student to bring this strike to an end as soon as possible and help to improve your staff working conditions. Here is what you can do:

There are some things you can do if you do not support the strikes: